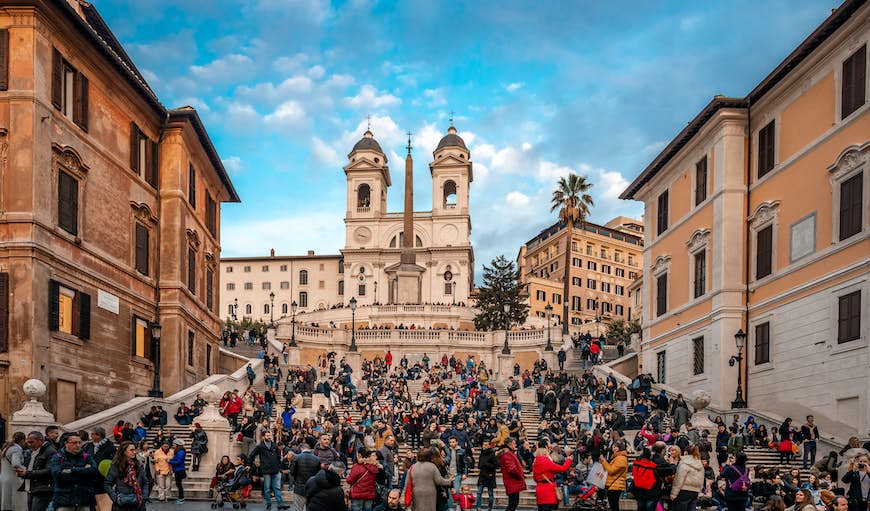 Italian authorities have introduced a slew of new rules in recent years in response to issues associated with over-tourism.

From sitting on the Spanish Steps in Rome to visiting Venice for a day without pre-booking and paying an entry fee, there are specific everyday activities that could see you hit with a fine of up to €1000 ($1022) or a Daspo (temporary ban from the area).

Some have been presented with a zero-tolerance approach. Such as an incident pre-pandemic when two German tourists were fined €950 ($1058) and immediately asked to leave the city after they were found making coffee on a portable stove beneath Rialto Bridge. Officials confirmed that this was the 40th time in two months that visitors were ordered to leave town for breaching the rules.

‘’Venice must be respected,” mayor Luigi Brugnaro said at the time, “and bad-mannered people who think they can come here and do what they want must understand that thanks to local police, they will be caught, punished and expelled.”

Just this month, the mayor of Sorrento, said that fines would be imposed on people wearing swimsuits, bikinis, or walking around bare-chested in the town. “No more with the indecent behavior,” he said, confirming fines would range from €25 ($26) to €500 ($511).

In Rome, police have been encouraging lounging tourists to move from the Spanish Steps as sitting on them is now subject to a fine of about €400 ($450).

If you’re planning a trip to Italy and don’t want to be that person who could offend (or worse, commit an offense), simply respecting the country and its citizens should be enough to keep you out of trouble. That said, even the most well-intentioned visitor might slip up from time to time. With that in mind, here’s a quick brief on what not to do on your next visit to Italy’s top tourist destinations:

Italy’s best dishes and where to try them

1. Take a photo inside the Vatican’s Sistine Chapel.

2. Sit down on the Spanish Steps.

3. In fact, don’t sit or lay down in front of shops, historical monuments and bridges. You’ll more than likely be moved on.

4. Drag pushchairs, scooters or wheeled suitcases up the Spanish Steps in Rome.

5. Eat or drink at famous sites in any city.

6. Eat on the streets of Florence’s historic center – Via de’ Neri, Piazzale Degli Uffizi, Piazza del Grano and Via Della Ninna – from noon to 3pm and from 6pm to 10pm daily.

7. Feed the birds in Piazzo San Marco in Venice.

8. Wade in the Trevi Fountain. The activity is banned and you could risk a hefty fine.

9. Or, stand too close to the Trevi Fountain; city officials in Rome are considering installing protective barriers around the historical monument.

Insider tips for the best things to do in Italy

Get trusted guidance to the world’s most breathtaking experiences delivered to your inbox weekly with our email newsletter.

10. Visit Venice for the day without pre-booking and paying an entry fee after January 2023.

12. Fly a drone in an urban area without a license or a permit.

13. Set up picnics in public spaces in Venice or pause on the city’s bridges for too long.

15. Jump into fountains anywhere or otherwise damage or climb on them.

16. Busk on public transport in Rome.

18. Drink alcohol on the street between 8pm and 8am in Venice.

19. Attach lovelocks to bridges in Rome and Venice.

21. Let your mouth touch the spout of Rome’s public drinking fountains, known as nasoni. Instead, cup your hands under the spout of the tap and place your finger under the stream to direct an arc of water to your mouth.

22. Drink alcohol from glass containers on public streets, public transit and in non-enclosed green spaces in Rome after 10pm. Or drink alcohol out of any container after midnight in these spaces.

23. Dress up as a historical figure or character like a “centurion” (gladiator) in Rome and pose for photos with tourists.

24. Walk around shirtless or in your swimwear in any metropolitan area. This state of dress is strictly restricted to the beach or lido. This is especially true in Sorrento where you could be fined up to €500 for breaching the dress code.

25. Wear sandals or flip-flops while hiking in Cinque Terre.

26. Walk around barefoot in Praia a Mare.

27. Swim in the Blue Grotto on the island of Capri. You can visit by boat, but swimming in the grotto is strictly forbidden; ask supermodel Heidi Klum who was fined €6000 in 2019 for taking a dip in the waters.

28. Steal sand from the beaches of Sardinia (or any beach for that matter). You could face up to six years in prison.

29.  Forget to bring euros with you when visiting the beach. Some charge cover fees and most charge for the use of sun umbrellas and loungers.

10 national parks you have to visit in Italy