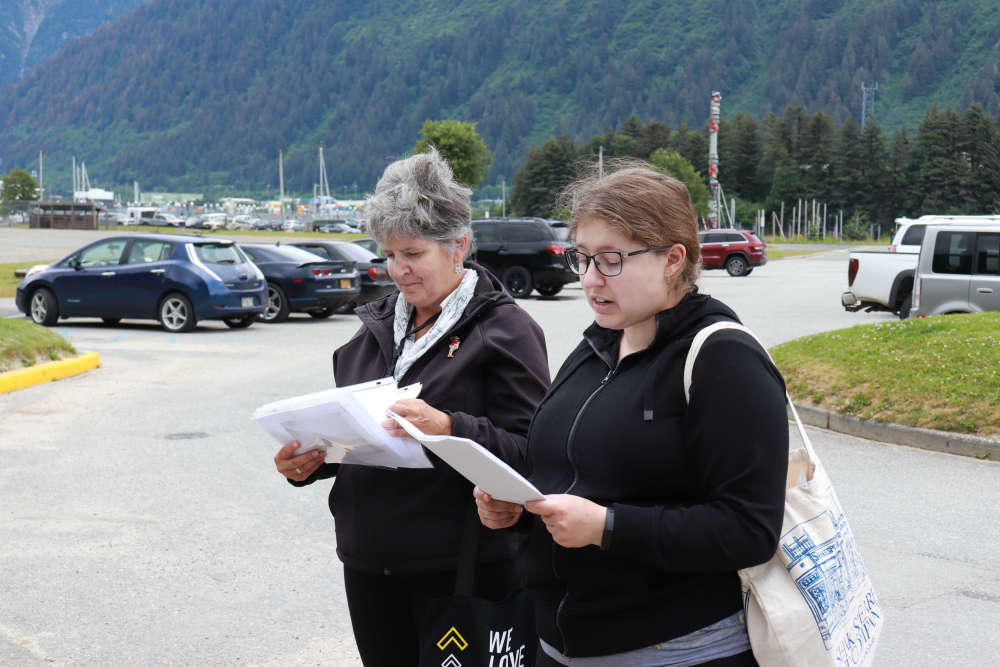 Schoenfeld and Longenbaugh were also crime reporters for most of their lives.

Longenbaugh worked at the Juneau Empire and Sitka Daily Sentinel, then moved on to be a freelance writer, and later a social worker.

Schoenfeld talked about his career as a reporter for KINY and the Juneau Empire.

“Between here and work I’ve done down South too, it’s between 37-38 years as a journalist.”

Longenbaugh explained how being crime reporters influenced their interest in the crime walking tour idea.

“I think our interest in history, we began looking at all of this through the perspective of how did newspapers cover these stories? And our first presentation focused on newspaper coverage of the stories. And I talked a little bit about that on today’s tour when I talked about Lucy Shellhouse and how she was described in one newspaper. And, it’s so demeaning and so belittling of a woman who had so many accomplishments. So, the newspapers, which was, of course, the main media source, at the time, really defined for the community, how much they should or shouldn’t be interested in a particular crime. You can also see how the standards in reporting changed over time.”

The crime tours began in 2018 after Longenbaugh and Schoenfeld applied for and were awarded a Juneau History Grant to create a public presentation to be offered at the City Museum about little-known murders that occurred in the Juneau area from 1898-1940.

Longenbaugh explained how the tour is fundraising for the city museum.

They also have done fundraisers for their church, the Church of the Holy Trinity.

She anticipates this winter doing another series of presentations for their church as fundraisers.

“It’s been a fun way to reach out to the community,” she summarized.

Longenbaugh also responded to a question about the amount of research that went into compiling the walking tour’s detailed information and history.

“I figure, Ed and I, between us, probably do about 1000 hours of research for each story that we tell. It’s very, very involved. Between 1900 and 1960, we found about 80 murders. We then used that spreadsheet to identify stories that we thought would be worth conducting more research into. That became the basis of our walking tours and presentation, and then finally my book. One of the stories we told that happened in Sitka involved us going to Sitka and walking around the cemetery there to try to get a handle on where that victim may have been buried. And that was extremely educational. We talked to people who may have known the victim, we ended up tracking down a woman who knew a lot about the case because her husband had been the federal marshal at the time. So we do a lot of research for each story that we tell because we want to just try to find out as much as we possibly can about every character in the story.”

Schoenfeld added to that with the statement their tours are just as much about history as they are about murder.

Longenbaugh agreed, saying they try to focus on how the community operated at the time to put the murders into context.

“I have 10 stories in there. Although Ed helped me research all of them. I did all the writing, which is why I’m the author of the book. And there are 10 different stories and we put them in the book in chronological order. So again, they occur between 1902 and before statehood, which happened in 1959. I think our last story was about 1956. It’s at the city museum, it’s also at Hearthside. It happened just as much downtown as well. I would like to talk about the fact that these are called forgotten murders for a reason. And the reason is because in talking to folks about our walking tours, and in talking to them on the walking tours, I always ask people if they’re familiar with stories that they want to hear more about particular stories. And honestly, these were all forgotten stories. Once in a blue moon, we get somebody who knows something about the serial killer who we talked about downtown. But the majority of these stories are about people who’ve been completely lost. There was racial marginalization, but we also saw women who chose to be prostitutes when there was so few choices for women to make a living, who then their lives were marginalized. Both downtown and Douglas, we came across these stories where women’s lives were not seen as important simply because they were forced or chose a profession of prostitution.”

Schoenfeld added on about why those people may have been forgotten.

Furthermore, Longenbaugh and Schoenfeld talked about their last upcoming tours for this summer.

If you would like to sign up for a tour, go to https://juneau.org/library/museum/walking-tours or call the museum at 907-586-3572 to buy tickets in advance.

The downtown tour is two to four while the Douglas tour is one to three. 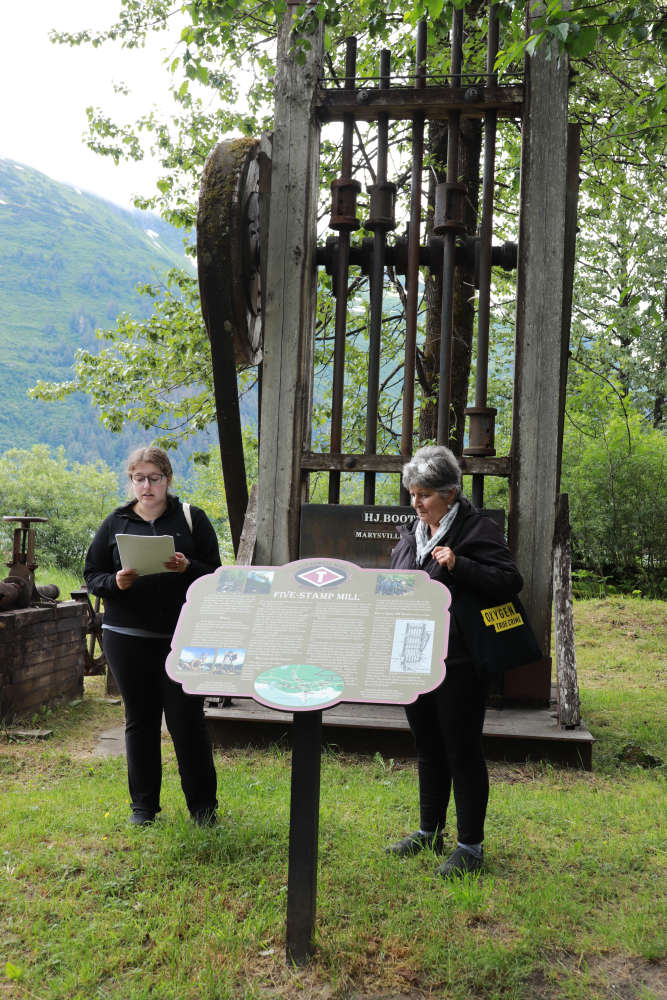 Above: Tour guides tell a historic murder in front of Treadwell’s stamp mill. Below: A 1912 historic Douglas city fire pump that was also nearby a murder site that is explained on the tour. 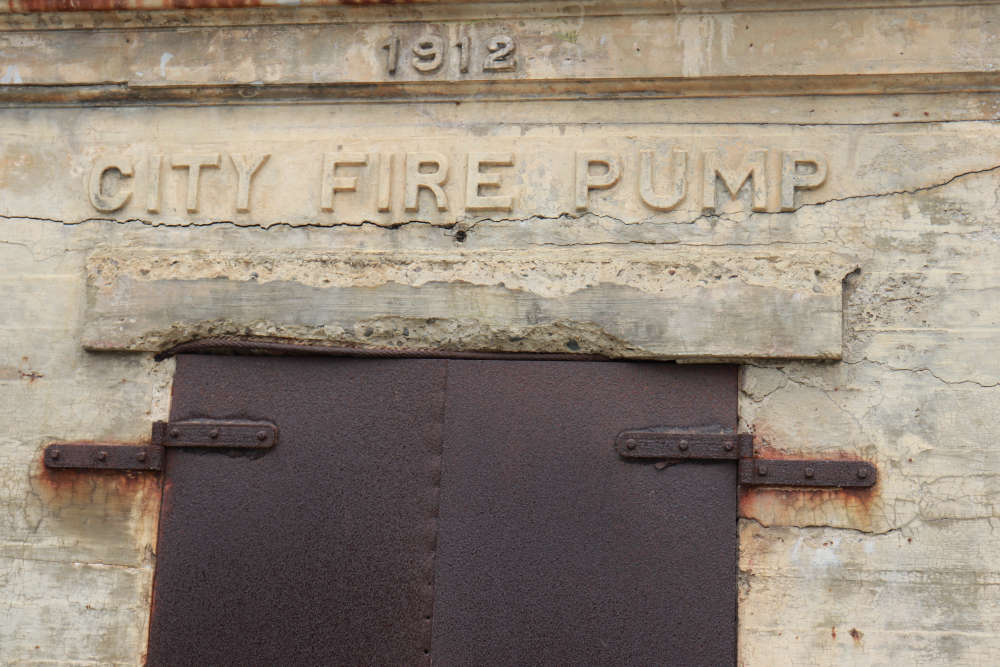