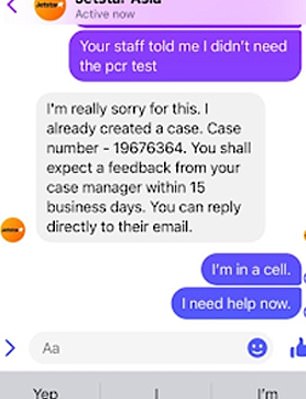 An Australian tourist claims he was locked up in a ‘filthy’ Singaporean immigration prison for 40 hours after Jetstar gave him wrong entry advice and refused to help.

Richard Grant flew from Darwin to Thailand three months ago but was refused entry to the country because he hadn’t had a Covid PCR test – something he insists Jetstar told him he didn’t need to do.

Mr Grant was then returned to Singapore – the country he had transited from.

It was the beginning of a horrendous ordeal. 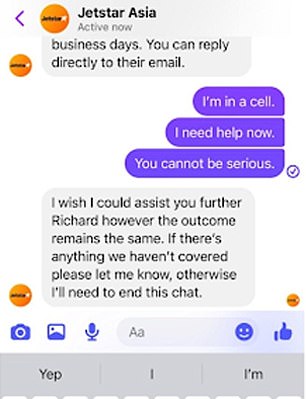 Messages between Jetstar staff and Mr Grant (above) show the airline did not think his case was a priority, despite him being locked away for their mistake

Mr Grant was locked up in a Singaporean immigration facility and sent messages to Jetstar’s Facebook page pleading for them to assist him.

‘Your staff told me I didn’t need a PCR test,’ he said – before the budget airline replied that he would get a response from a human within 15 business days. 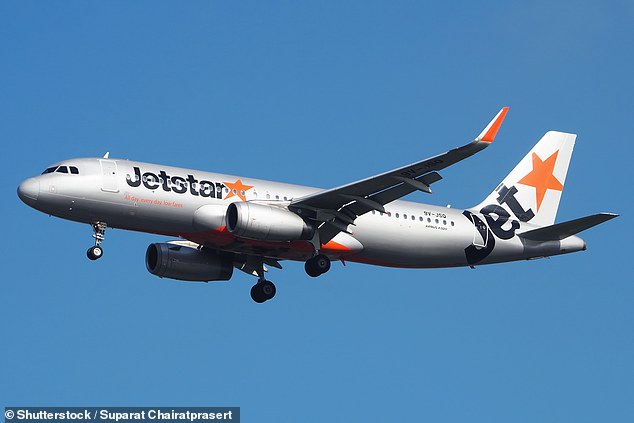 Mr Grant said he tested positive Covid two weeks before visiting Thailand, and contacted Jetstar to find out how he could go ahead with his holiday.

Jetstar staff told him he would only need a letter of recovery from his doctor and would not need to undergo a PCR test.

‘I was booked in to get the test done and I cancelled it because they told me I didn’t need to do it,’ he told Sydney radio station 2GB.

However, when he arrived in Thailand authorities told him he could not enter the country without a negative PCR result and sent him back to his transit country, Singapore.

Visitors to Thailand need to either show proof they’re vaccinated against Covid or a negative test.

Mandatory tests for those vaccinated against Covid were dropped back on May 1. 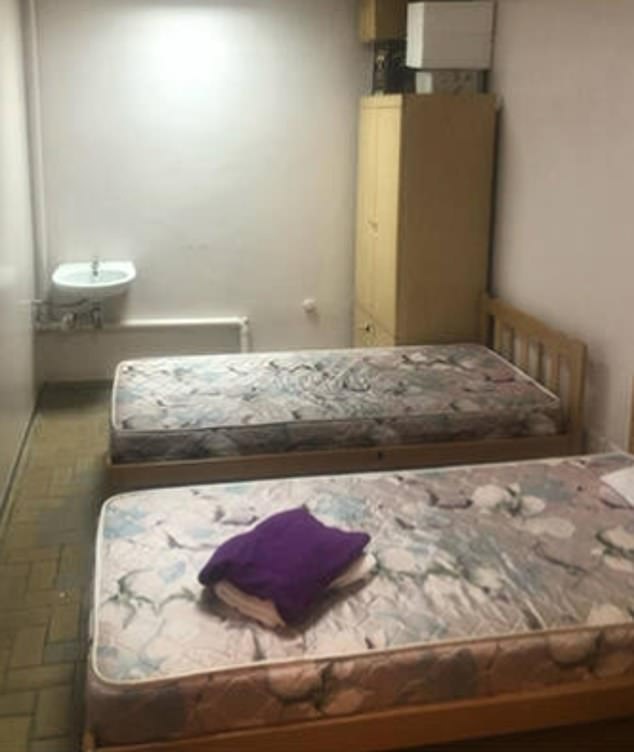 Mr Grant arrived at Singapore airport at 2am where he was greeted by immigration officers and taken into custody.

They said they would not be able to help him get out without confirmation from Jetstar about the precise circumstances of his predicament.

Jetstar staff said his matter might not be dealt with for 15 days.

Still, officers at the detention centre assured Mr Grant that Jetstar staff would come to work at the airport in the morning and could help him then.

‘The way (immigration officers) explained it to me was it’s 2am, there were no staff there from Jetstar but staff will be on deck at 6am so unfortunately they have to put me in a room until someone from Jetstar can come help,’ he said. 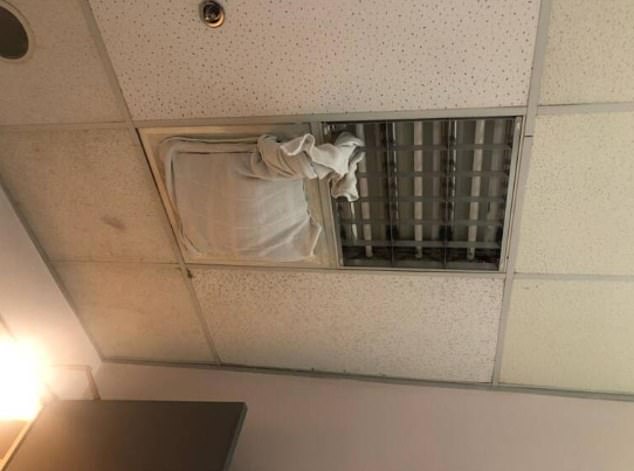 His time in immigration custody means Mr Grant is now banned from Singapore for life, meaning he won’t be able to travel through the transit hub anymore despite living just a four-hour flight away.

He says his desperate messages to Jetstar show staff didn’t think his case was a priority.

In one message exchange, Mr Grant wrote: ‘I’m in a cell. I need help now’.

A Jetstar staffer responded to his cry for help by saying: ‘I wish I could assist you further however the outcome remains the same.

‘If there’s anything we haven’t covered please let me know, otherwise I’ll need to end this chat.’ 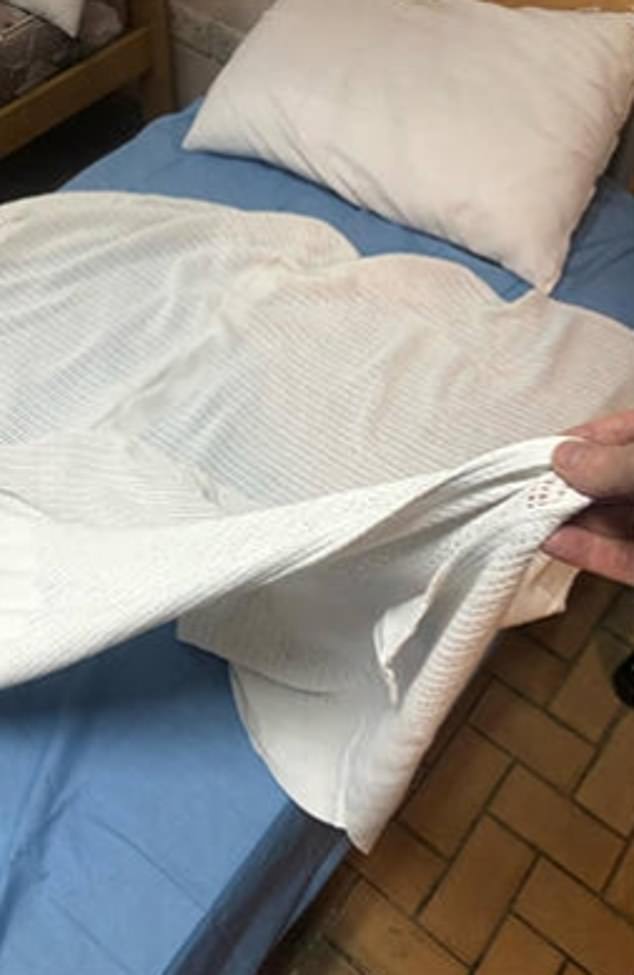 Mr Grant said the lack of communication from Jetstar was disheartening as he faced the consequences of their wrong advice.

‘It was a filthy, two bunk cell that had a washbasin and that was all,’ Mr Grant said of his room in immigration detention.

‘There was no hot water, it was extremely cold and they wouldn’t give me any luggage. All I had was shorts and t-shirt on so I was freezing the whole time.

‘It was brutal. There was a guard at my door with a gun, I wasn’t going anywhere.’

Once he was finally released and allowed into Thailand, Mr Grant tried to reach out to Jetstar to figure out what went wrong.

He said he got no response from the airline until he contacted an ombudsman.

‘I explained the situation to (Jetstar) and while they were sympathetic they didn’t really understand the fact that I was locked up, effectively in jail,’ he said. 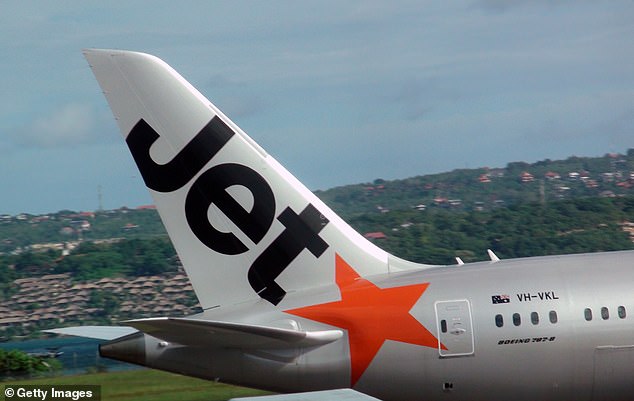 ‘They understand they gave me the wrong advice and they’ve offered to reimburse me for my out-of-pocket expenses, which is all well and good, but that’s not really the issue.

‘The issue is my ability to travel in the future. What I want them to do is step up, understand they put me in such a terrible situation and try to do something to help me.’

In a statement, Jetstar representative said: ‘We appreciate this was an incredibly stressful situation for Mr Grant.

‘This happened during a period of unprecedented government restrictions on global travel which were changing frequently, which is why we continued to strongly recommend that all passengers regularly check the entry requirements of the country they were travelling to.

‘A member of our team visited Mr Grant during his time in Singapore to provide support and options to enable him to continue his journey as quickly as possible.

‘Unfortunately, the most immediate option to travel was not taken up by Mr Grant, extending his time in Singapore.

‘We sympathise with Mr Grant and sincerely regret any misunderstanding that may have occurred prior to travel.

‘We will reach out to him once again to discuss what additional support we can provide.’