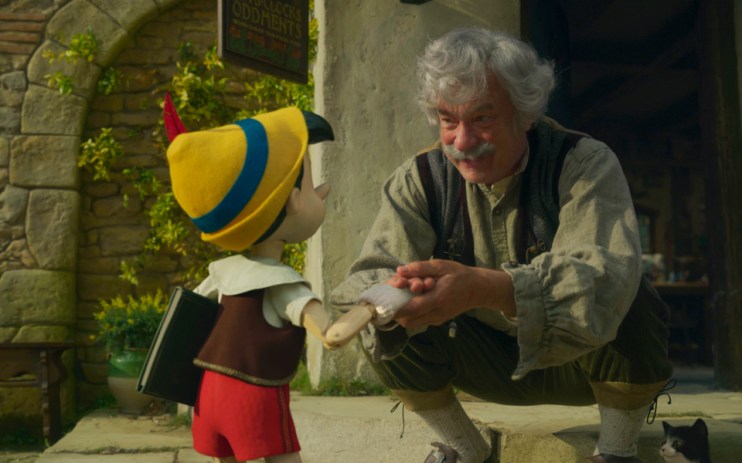 Disney’s 1940 animation Pinocchio may not have the affection of some of its modern peers, but few can argue its place in cinema history. One of the most acclaimed animated films of all time, its magic and sentiment set the tone for the studio’s reputation. If you watch a Disney animated film, or visit one of their parks, When You Wish Upon A Star still plays. With this in mind, a modern remake seems risky even as Disney mine their past for recognisable content.

Released straight to streaming for “Disney+ Day” (hope you remembered to send your cards), Robert Zemeckis (Polar Express, Who Framed Roger Rabbit) casts Tom Hanks as Geppetto, a wood carver grieving the loss of his family. One night, he carves a puppet that reminds him of his son, and names him Pinocchio. After wishing upon a star, the puppet comes to life and is told by a fairy (Cynthia Erivo) that he must prove himself worthy if he is to be a real boy. This proves harder than it seems, with temptation looming around every corner.

For decades, Zemeckis has pushed the envelope with motion capture and visual effects, so it’s no surprise that the world of the cartoon is brought to life spectacularly.

The puppet himself, and the world around him is gorgeous to behold, and the famously dark tone surprisingly intact. The Pleasure Island sequence that gave generations of kids nightmares is reimagined as a grotesque critique of a theme park, while memorable moments like Monstro the Whale and “I’ve Got No Strings” are faithfully adapted.

However, therein lies the problem. As with Guy Ritchie’s Aladdin or Jon Favreau’s Lion King, Pinocchio struggles for a reason to exist. A faithful remake either suffers by comparison, or feels redundant. Noone can accuse this 21st Century adaptation of lacking heart, but for all the spectacle it’s only ever a clever impression of greatness.

Joseph Gordon-Levitt is charming as Jiminy Cricket, infusing the character with all the golly-gosh wholesomeness you’d expect. Hanks will be divisive with his big bushy moustache and rambling delivery, but his infamous warmth on screen is exactly what the film needs. Elsewhere, Luke Evans hams it up as the sinister coachman, while Keegan-Michael Key’s Honest John soldiers through hacky material (jokes about Chris Pine and influencers already feel dated).

2022’s Pinocchio is unlikely to be remembered as the definitive version – just think of how quickly most other Disney remakes have disappeared from public consciousness. However, it is a sincere and polished attempt to walk in the footsteps of a masterpiece.